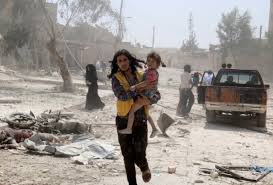 Another 20 were killed and 25 wounded many seriously, in Turkish air strikes near the town of Al-Amarneh, it said. The latest fighting is likely to raise deep concerns for Turkey’s NATO ally the United States, which supports the Kurdish militia —— known as the People’s Protection Units (YPG) —— as an effective fighting force against IS.

Turkey’s state-run Anadolu news agency said the army had killed 25 Kurdish “terrorists” in air strikes as part of its unprecedented operation inside Syria. at there 40 people deads as turkish shelling.

The bombardments came after Ankara suffered its first military fatality since it launched the two-pronged offensive against the Islamic State group and Syrian Kurdish militia inside Syria on Wednesday.