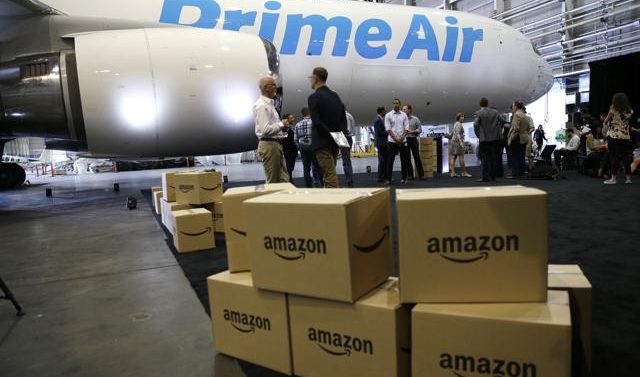 The Amazon.com logo is on e-readers, tablet computers and countless cardboard boxes on doorsteps. Now, the familiar, swooping arrow is about to show up somewhere new: plastered on the side of a Boeing 767.

The e-commerce giant on Friday is set to show off the aircraft it has dubbed “Amazon One,” a plane that is among a fleet of 40 leased from two air-freight companies in an effort to improve a supply chain straining to keep pace with the retailer’s growing sales and its swelling ranks of Prime members. 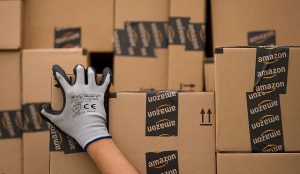 “Creating an air transportation network is expanding our capacity to ensure great delivery speeds for our Prime members for years to come,” Dave Clark, Amazon’s senior vice president of worldwide operations, said in a statement.

The move to create its own fleet of planes is part of a broader blitz of investment by Amazon to shore up its delivery capabilities. It has begun experimenting with an Uber-like network of drivers that could deliver packages within local markets such as Baltimore, Miami and Milwaukee. Last year, the company unveiled an Amazon-branded fleet of 4,000 trucking trailers to shuttle its wares. (Jeffrey P. Bezos, chief executive of Amazon, owns The Washington Post.) 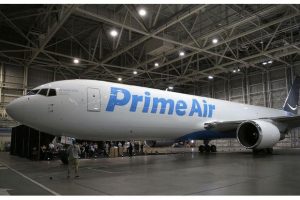 Amazon says its planes and trucking trailers are largely meant to help move goods from one warehouse to another, rather than to facilitate delivery of orders to customers. And, in that way, the company says its forays into the logistics arena are intended to complement the business it does with UPS and FedEx, not replace them.

Yet some analysts wonder if the buildup of planes, trucking power and drivers should be interpreted as something of a warning shot that Amazon has more ambitious plans to take greater control of the delivery process. Amazon is a major customer of UPS and FedEx, and the shipping firms have shrugged off the idea that the e-commerce giant intends to bypass them. Even if it did, FedEx, for example, has said that no single customer accounts for more than 3 percent of its revenue. 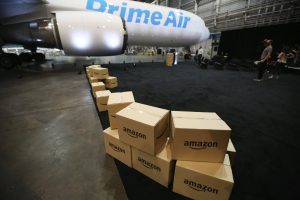 Whatever Amazon’s long game is on logistics, it is clear that it is looking to make a splash with the inaugural flight of Amazon One. The company is flying the aircraft on Friday in the Boeing Seafair Air Show, an annual event near its headquarters in Seattle. The side of the plane is emblazoned with the words “Prime Air,” and its underside features the Amazon logo. The curved Amazon arrow appears on the tail. The plane’s tail number – N1997A – is a prime number, a gimmick the company says is meant as a nod to its Prime customers. Eleven of its leased planes have been in the air ferrying goods, but this plane is the first to be splashed with Amazon branding. The rest of the fleet will be getting the logo treatment soon.

Even as Amazon ventures into new territory with its trucking and air fleets, it continues to make other, more familiar investments in its logistics capabilities. The retailer has famously been plowing millions of dollars into building a network of fulfillment and sorting centers that enable its promise of two-day shipping on Prime orders. In this quarter alone, the company is set to open 18 fulfillment centers, or three times the number it opened in the same quarter in 2015. The retailer hopes the efforts will make it better prepared for the coming holiday season crush. Last year, fulfillment costs soared in that quarter as demand increased at its warehouses.