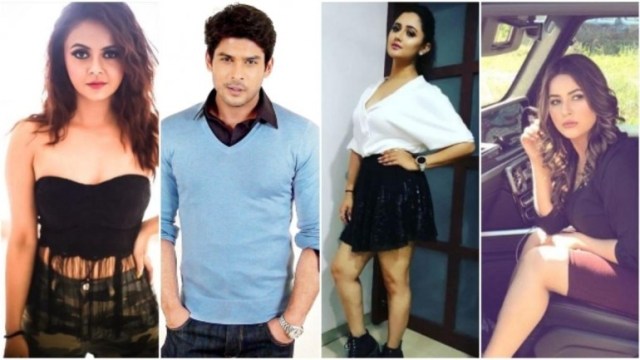 Bigg Boss 13 has started on September 29 at 9 pm. Salman Khan started the show in a fabulous style. This season saw the entry of many celebs, including famous TV stars like Paras Chhabra, Siddharth Shukla, Rashmi Desai. Apart from this, two contestants from Jammu and Kashmir also reached the show. This time the show is going to be spicy, this thing is certain because on the very first day, there was a tussle between the stars. Know who came to the Bigg Boss house on the first day and what work did Salman tell the contestants.

TV actor Siddharth Shukla joined Bigg Boss as a contestant. Siddharth’s show made a big entry. As soon as Siddharth Shukla arrived, Salman Khan asked him to do the kitchen work. Salman has clearly told Siddharth that he will have to cook himself here.

Aseem Riyaz, the fifth contestant of Bigg Boss from Kashmir

Aseem Riyaz has a banged-up entry in Bigg Boss. While there are many glamorous faces to be seen on the show, but talk about this time’s candy, she is the model Aseem Riyaz. Aseem is a chocolate boy who can be an interest for the female contestants of this show. She is a fitness model and her pictures are well liked on social media.

Mahir Sharma has entered as the sixth contestant of Bigg Boss. Mahira Sharma, who has worked in TV shows like Nagin and Kundali Bhagya, is from Jammu and has worked in music videos and commercials. Mahira is not only a tick talk star but also a social media celebrity. Talking about the small screen, she was last seen in the MTV show ‘A Date to Remember’.

TV actress Devolina has entered Bigg Boss. She is the seventh contestant of Bigg Boss. Devolina has tried her hand in singing, dancing and albums. Devolina’s image has been good on the small screen, but it remains to be seen whether she can maintain her image on the show or create a new image in the minds of people like Hina Khan.

Who got the responsibility of the kitchen?

Devolina and Siddharth Shukla have got the responsibility of the kitchen in Bigg Boss house. Both have to make breakfast and dinner.

News anchor Shefali Bagga has entered Bigg Boss house. Shefali told Salman how she is going to handle things in the house. The same Salman said that with the arrival of Shefali in the house, there will continue to get special breaking news from Bigg Boss house.

Shahnaz Kaur Gill’s entry in Bigg Boss house. She is a Punjabi actress and singer. He requested Salman to hum the famous song of Salman-Katrina’s film with him. After this, Salman also performed a romantic dance with Shahnaz on this song. The same light-hearted note between Shefali and Shehnaaz was also seen.

TV actress Daljit Kaur was entered in Bigg Boss’s house. She recently appeared in Zee TV’s serial ‘Guddan Tumse Na Ho Hogega’. According to reports, the actress had said goodbye to the serial to enter Bigg Boss. Daljeet was married to Shaleen Bhanot but there were tremendous disputes between the two, after which both decided to separate.

In Bigg Boss 13, Amisha Patel will be seen as the mistress of the house. She will keep an eye on the antics of the family in this show and they can come and go inside the house whenever they want. Amisha looked very excited with her role in Bigg Boss.

Actress Koena Mitra attended the Bigg Boss house, who made headlines for her performance on Saki Saki Song in the movie Musafir. Talking about his journey, he said that I have been out of Kolkata since the age of 17 and have managed to make an established career in Mumbai. Salman also admitted that the atmosphere of the house will become quite interesting with the arrival of Koena. Koena chose Contestant Asim Riaz of Kashmir as his bed partner. He first chose Siddharth Shukla but after this a pole dance took place in which all the mail contestants participated. Koena chose Aseem as her bed partner after her dancing performance.

Govinda’s niece Aarti Singh has participated in Bigg Boss 13. She is also the sister of famous comedian Krishna. He has entered the show along with Krishna. Salman asked her if she does all her work on her own, on which Aarti agreed, Salman handed her home work and said that she would have to wash the utensils. After this Aarti got a chance to choose her bed partner. After the competition between Abu Malik and Paras Chhabra, Aarti chose Paras Chhabra as her bed partner.

All the contestants of Bigg Boss have got a great entry. There is hope of a fire in the house from day one. This time, Amisha Patel will also be seen as the mistress of the house in the show, which is expected to see a tremendous dose of entertainment in Bigg Boss season 13.