Home / News / Boats on the road, Bihar drowned in flood 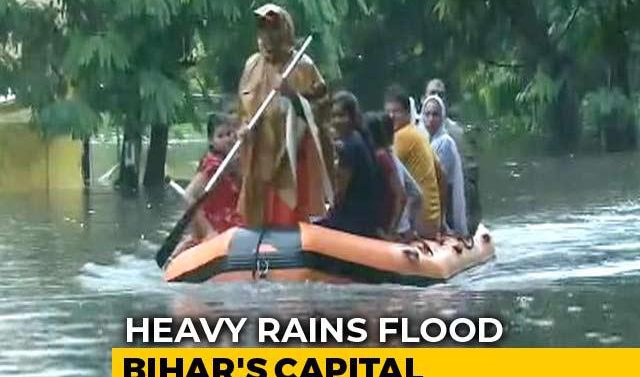 The month of September is coming to an end, but the rain is not taking the name of going. The incessant rains in Bihar have created an outcry. So far 23 people have died in this. Several districts of the state, including Patna, are drowning in torrential rains and floods.

Even more important thing is that the sky is not going to stop even for the next day or two. In such a situation, the situation may become worse. The worst is that of Patna, the capital of Bihar, which is completely submerged. Heavy rains have also exposed the arrangements in Patna. Water has been flooded from roads to homes and offices.

In many areas including Patna, water has been flooded from roads to people’s homes. Everyone has been imprisoned by the rain, whether officer or minister. Common people have also been imprisoned on the roofs of houses.In many places, water has also been filled on the railway track. The roads are swamped and traffic has come to a standstill. Boats are floating on the roads and vehicles are drowned in the inundation.

Efforts are being made to rescue people trapped in the water. Water curfew is in force and the stunned city seems to be crying over its helplessness.In view of the worsening situation due to rain and floods in Bihar, schools and colleges have been given a two-day holiday. Patna has been developed. Water has also entered Nalanda Medical College Hospital in Patna.

In most areas, the first floor is half submerged. There is only water from the road to the houses to the waist. The houses of leaders and ministers have also been submerged in Patna.The first floor of MP Rajiv Pratap Rudy’s house is half drowned. It has become difficult for people to get out of their homes.

A lot of water was also flooded around the house of Union Minister Ram Vilas Paswan. If someone wants to go to Paswan’s house, he has to cross the river. The posh colony of Patna, Pataliputra, has also been flooded. There is also the house of an IAS officer. The bridge was built to avoid water in the house.Today that bridge is also half drowned. People imprisoned in the houses are allowed to see this scene through the windows.

Chief Minister Nitish also gave many instructions to the officials for the relief of the people.Principal Secretary, Disaster Management Department, Supriya Amrit also informed Nitish Kumar about the current situation and disaster management.