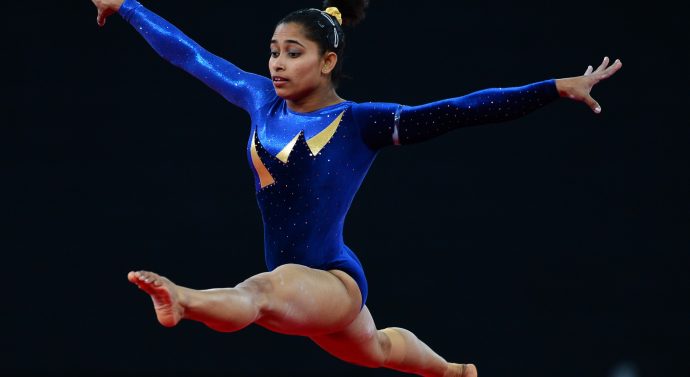 RIO 2016: Deepa karmakar: in the history of Indian gymnast Deepa scripted her best performance in RIO, who qualified for the Olympics riding on the Produnova, a tough front handspring and two front somersaults will showcase her expertise at the maneuver on Sunday. It denote the dedication to their game and She became the first Indian to make the cut for the individual vault finals in her debut Olympic Games after finishing 8th in the qualifying round in Rio.

Dipa karmakar, become the cynosure of all eyes of Indian. She is belonging to Tripura; an India. 22-year-old diminutive girl from Tripura had qualified for the Olympics at this very venue in April.

She has already grabbed a piece of history by becoming the first Indian female gymnast to qualify for the Olympics, she was the hope in gymnast for all Indians and Dipa Karmakar would aim to touch greater heights when she competes at the Rio Games, here on Sunday. Dipa showed her expertise at the maneuver of gymnast with their performance on Sunday

Deepa: She is amazing athlete in Indian history that has been practicing gymnastics since the age of six and had to train extra hard because she had flat feet. For that she has given her soul into mastering the extremely difficult Produnova – a double front somersault vault – and is relying on it for a super show. With their

Considered as one of the mainly difficult and dangerous vault in women’s gymnastics, the Produnova is the Indian’s trusted weapon, even giving her an edge for a shock medal in the event.

Dipa was the first Indian female gymnast to win a medal at the Commonwealth Games (Glasgow 2014) and followed it up with bronze at the Asian Championships in Hiroshima.  , Deepa karmakar hope of Indian to bellow the nation flag in RIO. Best opportunity of them.

She want a dream that fulfill in Olympic? I want to win a medal and give the best performance of my life