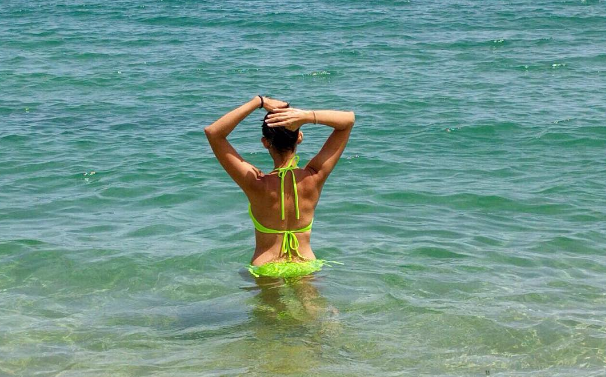 Everyone’s familiar with Amitabh Bachchan’s granddaughter Navya Naveli Nanda. Or say for that matter even Sridevi’s daughter Jhanvi Kapoor and Saif Ali Khan’s daughter Sara Ali Khan for they’re frequently making headlines for their much awaited Bollywood debut. Word is that either of the three will even be seen in Karan Johar’s Student Of The Year sequel which is soon coming. But look who’s just joined this race of good looking star kids – It’s Deepak Tijori’s daughter Samara for you guys! That’s right!

We stalked Samara on Instagram and boy, is she already prepped up for Bollywood? No seriously! The 20 year old seems to be well versed with films to an extent that she also worked on Varun Dhawan, John Abraham and Jacqueline Fernandez’s Dishoom recently. Here check out this behind the scene picture of Samara on the sets of Dishoom and you will know what we’re trying to say. Now we dunno if she is more into filmmaking or keen on acting, but the fact her Insta feed is so appealing definitely proves she is super kicked about joining Bollywood.

Not to forget, Samara was the same one who was in news for being kidnapped back in 2009. Malad resident Pritesh Doshi (26) had kidnapped the 13-year-old by forcibly pulling her into an auto rickshaw from the Lokhandwala market and taking her to a lodge in Malad. However, he was arrested soon after.

Nevertheless, we’re so glad Samara has grown up to be so gorgeous and talented today. Here check out her pictures below and tell us how many ya’ll are excited to see her in Bollywood soon? Drop your thoughts in the comments below and we’ll be back with more updates right here, only on BollywoodLife.