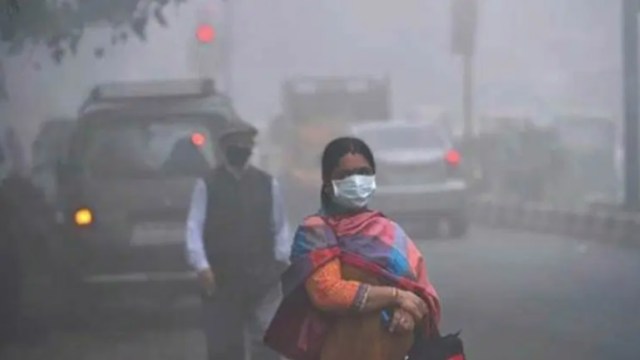 The air quality in the capital Delhi is getting worse with increasing cold. On Thursday, the Air Quality Index (AQI) in Delhi-NCR crossed 500, which falls in the dangerous category. The air quality index at Anand Vihar was recorded at 564.

Talking of Ghaziabad adjoining Delhi, the Air Quality Index was recorded at 560 here. While the AQI at Delhi Nehru Stadium has crossed the 483 level, the AQI in Noida has crossed the 588 level.

It is being told that the situation in the neighboring states is getting worse due to burning of stubble. Meanwhile, all government and private schools in Delhi-NCR will be closed today and tomorrow.

After getting some relief for a few days last week, pollution levels in Delhi-NCR are again becoming dangerous again. Due to increasing pollution, all the schools in Delhi-NCR have been discharged till November 14 and 15.

The Environment Pollution (Prevention and Control) Authority extended the ban on hot-mix plants and stone-crushers in Delhi-NCR till 15 November. Earlier, the Supreme Court had halted the construction work in Delhi-NCR till its next order on November 4.

Noida and Ghaziabad District Magistrate also issued an order to close the school as the wind reached dangerous levels. Stating that the quality of air is very poor in DM’s office order, all government and non-government schools till class-12 were ordered to be closed on 14-15 November.

At the same time, Ghaziabad DM Ajay Shankar Pandey also issued an order to close schools in his district for 2 days. According to the order issued, in view of the increasing dangerous air pollution in the entire area , all the schools (government and private) up to class-12 will be closed on November 14-15.

Earlier, Delhi Chief Minister Arvind Kejriwal said on Wednesday that if the air quality continues to deteriorate further, the odd-even (even-odd) scheme can be continued further. Kejriwal said that he is concerned about the health of the people as well as the image of the country in front of the world due to air pollution. He said, we can extend the duration of the odd-even if needed.