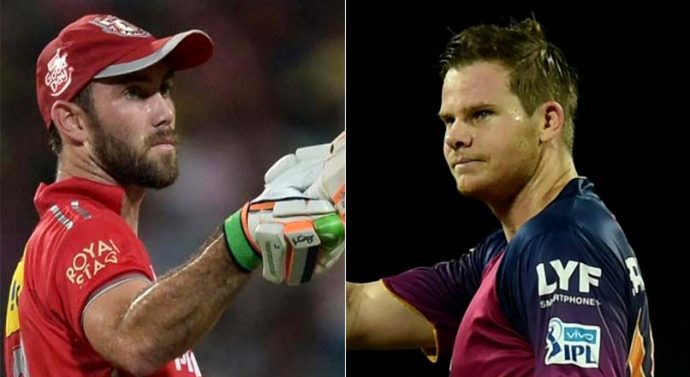 Kings XI Punjab will be aiming to continue their late surge against Rising Pune Supergiant in a winner takes it all Indian Premier League encounter, on Sunday. The final weekend of the league stage couldn’t have been more enticing with only Mumbai Indians assured of a play-off berth with 18 points. Supergiant fluffed their lines in what seemed to be an easy run-chase against out of contention Delhi Daredevils only to keep the race of final four open till the last game.

Supergiant are currently on 16 points from 13 games with a net run-rate -0.083 while Kings XI Punjab are on 14 points from equal number of matches but have a comparatively better run-rate of +0.296.

When the two teams square off on Sunday, the equation is pretty simple for Glenn Maxwell’s team. A win is all that they need to qualify as it will take them to 16 points with a superior net run rate. The Punjab outfit doesn’t have to look at any other results.

For Supergiant, a defeat will be dangerous if Sunrisers Hyderabad happen to win their game against Gujarat Lions and clinch their play-off place with 17 points.

In case Sunrisers lose today, then Supergiant can still make it to the play-offs despite defeat.

For Supergiant, it will be a challenge facing KXIP, whose campaign gained momentum during the business end of the tournament.

Young Rahul Tripathi 360 has been the find of the season for Supergiant.

The biggest advantage for Supergiant has been the balance that Stokes has brought into the side.

At 14.5 crore, he has repaid every penny that he has been paid so far. His big-hitting and the lethal yorkers has made him the most valuable player for his franchise.

Stokes is set to leave after Supergiant’s game against KXIP as national duty beckons him. But he would like to have a memorable parting shot at Maxwell’s men, who managed a great escape during the high-scoring thriller at Wankhede.

Bowling has been KXIP’s weaklink but the two India discards — Sandeep Sharma and Mohit Sharma have bowled some good overs at the death. The two Sharmas bowled 19th and 20th over during the Mumbai Indians encounter.

Mohit was fantastic as he bowled four dot balls to Kieron Pollard with KXIP winning by 7 runs managing to live on the edge.

Hashim Amla and David Miller’s absence left for national duty didn’t affect the balance with Martin Guptill nicely fitting in. Shaun Marsh and Maxwell with all their T20 experience and the gutsy Wriddhiman Saha make for a potent line-up. Manan Vohra can also be dangerous on his day.

Axar Patel brings in the necessary balance with his all-round abilities.