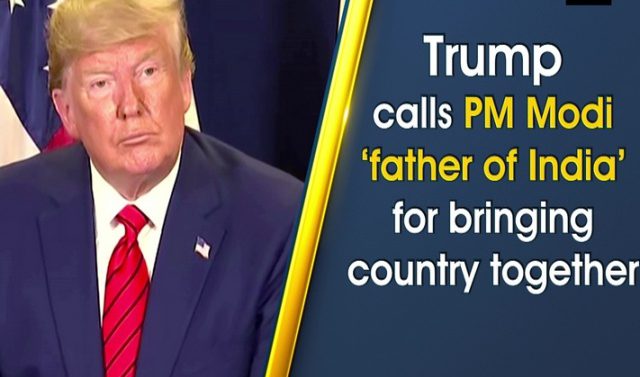 Bilateral talks were held in New York on Tuesday between US President Donald Trump and Prime Minister Narendra Modi. The two leaders held a press conference after the meeting, but during this time Donald Trump said something that gave rise to a new debate. Trump strongly praised Narendra Modi and called him ‘Father of India’. Now the controversy has increased on this and the Congress leader has opposed the statement of Donald Trump.

Priyank Kharge, son of Congress leader Mallikarjun Kharge and a minister in the Karnataka government, opposed Donald Trump’s statement on Twitter. He wrote that then will Americans now decide who is the father of the nation? If we see these fascist people have looted our people by reasoning them intellectually. The propaganda of social media has spoiled the generations to come together.

On Tuesday, US President Donald Trump held a press conference with Prime Minister Narendra Modi in New York, during which he praised Narendra Modi.

In this press conference, Donald Trump said, ‘If I remember the India of the past, people used to fight often there, but Narendra Modi has done the work of bringing everyone together. He has worked to bring everyone together like a father, maybe he is ‘Father of India’, we will call him ‘Father of India’. Bringing people together is a great job and Narendra Modi has done brilliantly in this field.

Donald Trump compared Narendra Modi to American pop singer and superstar Elvis Presley during this period, after which his songs and pictures started going viral on India’s social media.