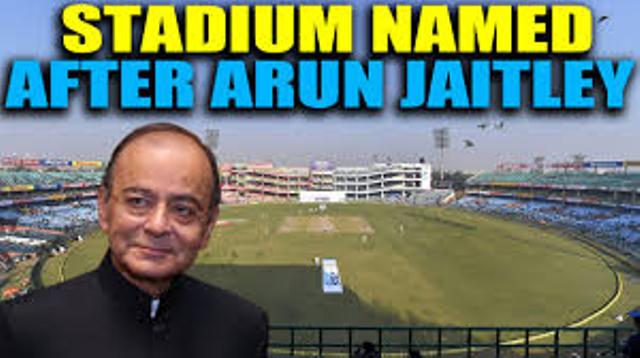 The Delhi & District Cricket Association on Tuesday announced that the Feroz Shah Kotla cricket stadium will be renamed after Arun Jaitley, who died on August 24. The decision was taken to honour Jaitley who served as DDCA’s president from 1999 to 2013. The renaming of the stadium will be done on September 12. In the same function, one of the stands in the ground will be named after current Indian skipper Virat Kohli. DDCA took to Twitter to announce their decision.

Speaking on the occasion, DDCA president Rajat Sharma said, “It was Arun Jaitley’s support and encouragement that players like Virat Kohli, Virender Sehwag, Gautam Gambhir, Ashish Nehra, Rishabh Pant and many others could make India proud.”

“What can be better to have the stadium named after the man who rebuilt it under his presidentship,” Sharma added.

Earlier, in a letter to the Delhi Lt. Governor Anil Baijal, BJP MP and former India opener Gautam Gambhir had on Monday said the Yamuna Sports Complex should be renamed after Jaitley for his contribution to nation building and for his love for cricket.

“May he remain in our hearts forever. As a mark of respect to our beloved leader, I hereby propose to rename ‘Yamuna Sports Complex’ as ‘Arun Jaitley Sports Complex,” Gambhir had said in a tweet, while posting a copy of his letter to the Lt. Governor.

Former Union Minister Jaitley died on August 24 after prolonged illness. BCCI administrators as well as cricketers took to social media to condole the demise. In fact, the Indian team had also worn black armbands as a mark of respect for Jaitley during the third day’s play of the first Test between India and West Indies.

Feroz Shah Kotla Stadium To Be Renamed After Arun Jaitley