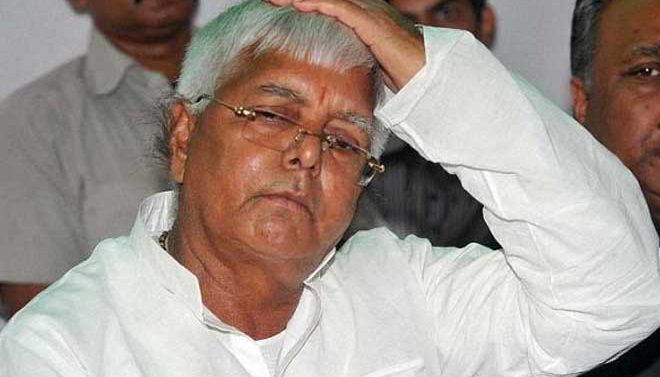 Jharkhand High Court’s verdict, the Supreme Court on Monday paved the way for a fresh trial of  RJD leader Lalu Prasad, former Bihar Chief Minister Jagannath Mishra, and other accused in a criminal case involving the withdrawal of money and falsification of records from the Deoghar Treasury in connection with the Rs.900 crore fodder scam.

Two decades have passed since the scam was unearthed. It involved politicians and bureaucrats belonging to successive administration siphoning of several crores of rupees on the pretext of purchasing livestock feed over a period of 20 years. It was one of the early cases where sitting legislators were convicted and had to lose their Assembly and parliamentary seats. It is also the reason why a popular leader such as Mr. Prasad is not contesting elections, even though he played a key role in the RJD-JD(U) combine wresting power in Bihar.

The fodder scam is a collective term for a set of 64 cases, of which 53 were litigated in Ranchi. It all began in 1985 when then CAG T.N. Chaturvedi sniffed out a possible embezzlement of funds from the Bihar Treasury and various departments. The CAG noticed delay in monthly account submissions from the State and also noted small scale false expense reports. Ten years later, the ‘small scale’ embezzlements added up to Rs. 900 crore.

In 1996, State Finance Secretary V.S. Dubey ordered district magistrates and deputy commissioners of all districts to go into cases of excessive withdrawals. Around the same time, then Deputy Commissioner Amit Khare raided the office of the Animal Husbandry Department at Chaibasa. It unearthed a huge cache of documents showing illegal withdrawals and revealed a nexus between officials and suppliers.

The State government instituted two separate one man commissions of inquiry. The first was headed by State Development Commissioner Phoolchand Singh, and was constituted on January 30, 1996. However, this one was aborted when Mr. Singh’s name began to figure in the charge sheet.

The second commission was headed by Justice Sarwar Ali, and was instituted on March 10, 1996.

Meanwhile, the Patna High Court ordered the CBI to take over the probe after a public interest litigation was filed by State BJP president Sushil Kumar Modi. Both Mr. Mishra and Mr. Prasad were named in the CBI’s charge sheet in July 1997. Succumbing to pressure, Mr. Prasad gave up the Chief Minister post, but not before installing his wife Rabri Devi in the post. The Jharkhand High Court continued hearing the cases after Bihar was bifurcated.

The fodder scam didn’t help the Opposition much as Mr. Prasad, and the RJD emerged triumphant in the 2000 elections. Ms. Rabri Devi survived a vote of confidence and became the Chief Minister with the support of the Congress and the JMM.

Mr. Prasad contested in the Rajya Sabha election and later in the general elections. He even served as Railway Minister between 2004 and 2009, when the trials were under way. The BJP and the JD(U) effectively turned the scam into a poll plank, which led the alliance to power in 2005. The combine governed the State until they broke it in 2014.

In 2013, Mr. Prasad and Mr. Mishra were convicted in the Chaibasa Treasury case, the first among the 53 cases. Both the leaders are out on bail, and have appealed against their conviction.

January 1996: The scam surfaces after Deputy Commissioner Amit Khare raids the offices of the Animal Husbandry Department and seizes documents that showed siphoning of funds by non-existent companies in the name of supplying fodder.

March 11, 1996: The Patna High Court directs the CBI to probe the scam. The Supreme Court upholds the order.

March 27, 1996: The CBI registers an FIR in the Chaibasa Treasury case.

June 23, 1997: The CBI files a charge sheet and makes Mr. Prasad and 55 others as accused in the case. Sixty-three cases were registered under IPC Sections 420 (forgery) and 120 (b) (criminal conspiracy) and Section 13 (b) of the Prevention of Corruption Act.

July 30, 1997: Mr. Prasad surrenders before a CBI court and sent to judicial custody.

April 5, 2000: Charges framed before the special CBI court. Rabri Devi’s name included as co-accused. She was granted bail, Mr. Prasad’s bail plea rejected and he was remanded in judicial custody.

October 5, 2001: The Supreme Court transfers the scam cases to Jharkhand after the creation of the new State.

December 2006: Mr. Prasad and Ms. Rabri devi acquitted of charges in the disproportionate assets case filed by the CBI

June 2007: The special CBI court in Ranchi sentences 58 persons, including two nephews of Railway Minister Lalu Prasad, to jail terms ranging from two-and-a-half years to six years for fraudulently withdrawing Rs. 48 crore from the Chaibasa Treasury in the 1990s.

March 2012: Six months after their appearance before the Special CBI court, charges are framed against Mr. Prasad and Mr. Mishra. The court charges the former with fraudulent withdrawal of Rs. 47 lakh from the treasuries at Banka and Bhagalpur districts, where alleged forged and fake bills were drawn by the Animal Husbandry Department in 1995-96 when he was the Chief Minister.

September 30, 2013: Mr. Prasad and Mr. Mishra, along with 45 others are convicted by Special CBI Judge Pravas Kumar Singh. Mr. Prasad stands disqualified as member of the Lok Sabha following the verdict.  The two cannot contest any election, including those of the Assembly/Council, for six years from the date of their release from jail.

November 2014: The CBI challenges the order of the Jharkhand High Court quashing four pending fodder scam cases against Mr. Prasad on the grounds that a person convicted in one case could not be tried in similar cases based on same witnesses and evidences. The court upholds the CBI plea to continue proceedings in the trial court against Mr. Prasad under two sections.

November 2016: The Supreme Court pulls up Mr. Mishra for allegedly dragging and delaying the appeal filed by the CBI challenging the quashing of four pending fodder scam cases against him.

May 2017: The Supreme Court holds that Mr. Prasad and other accused persons, including Mr. Mishra, will be tried separately for corruption in a criminal case involving the withdrawal of Rs. 84.53 lakh and falsification of records from the Deoghar Treasury in 1991-94