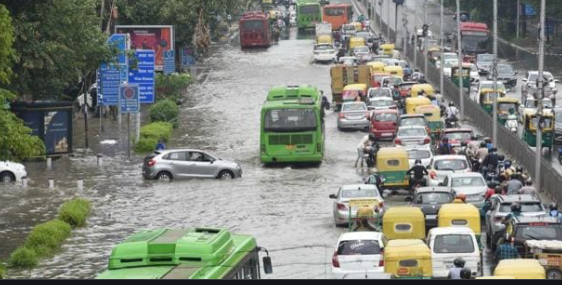 Record rain in Delhi today led to flooding and traffic jams during the morning rush hour in many parts of the national capital and neighbouring Gurgaon and Noida. Cars crawled on major roads in the heart of Delhi as rainwater slowed down traffic and left large parts of the city submerged, cutting off many routes.

The heavy burst of rain submerged several areas, including the diplomatic enclave of Chanakyapuri, in knee-deep water and affected traffic movement in parts of the city. The city gauged 75.6 mm rainfall in just three hours starting 8:30 am.

Waterlogging was reported under AIIMS flyover, at Ring Road near Hyatt Hotel, Maharani Bagh, and W-Point ITO, among other places, according to the city traffic police and Public Works Department (PWD) officials. Carriageway of IOCL Dwarka to NSG Dwarka is closed due to waterlogging, Please avoid using this route. Traffic is heavy on Narayana road as the stretch from Narayana to Dhaula Kuan has been damaged,” Delhi Traffic Police said on Twitter.