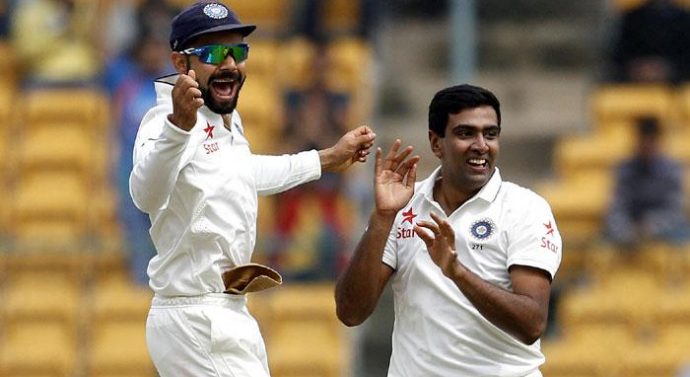 Kanpur      India and New Zealand landmark 500th Test match played between India won by 197 runs. With the victory in the three-Test series, India took a 1-0 lead. Chasing a target of 434 to win, New Zealand was the deadliest attack against Ashwin but the whole of New Zealand were bowled out for 236 in their second innings. It was India’s 130th Test victory. Ravindra Jadeja for his all-round performance was awarded man of the match.

New Zealand had a bad start in the second innings. The team’s first wicket fell just 2 runs. Gptil opener Ashwin got caught on the score of zero. Gptil caught by Murali Vijay caught. Latham Ashwin made his second victim and was lbw for just 2 runs. Ashwin Williamson made his third victim. He was Williamson lbw for 25 runs. Ross Taylor was run out 17 runs. By the fourth day’s play Luke Ronchi (38) and Sentonr (8) are unbeaten. Luke Ronki amazing 80-run innings but got caught by Jadeja, Ashwin them.

Indian pacer Mohammad. Shami struck an unbeaten sixth wicket of Votling. Shami was lbw Votling 18 runs. Mark Craig’s seventh wicket as the visitors fell. Shami bowled clean them on a run. Ashwin’s fourth victim Santonr and has caught 71 of them. Sodhi Ashwin his fifth victim and was clean bowled on 17 runs. Ashwin Wagner was his sixth victim.

Ashwin bowled in the second innings and six wickets while deadly Shami and Jadeja took one to two.