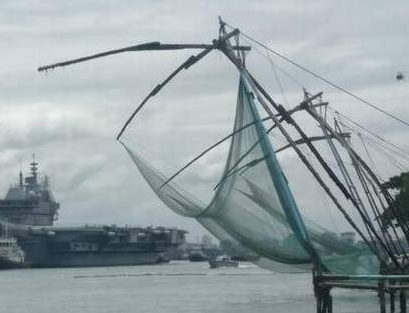 The much-awaited sea trials of India’s maiden indigenous aircraft carrier (IAC-1), built by the public sector Cochin Shipyard Ltd (CSL), began here on Wednesday. The 40,000-tonne carrier, whose keel-laying was held in 2009, is slated to join the Navy as INS Vikrant late next year.

Its induction will give a fillip to the sea control capabilities of the Navy in the Indian Ocean Region. While the Indian Navy currently operates one aircraft carrier. It is keen to add a third one to its fleet in line with its perspective plan to simultaneously operate three carrier battle groups so that two of them remain serviceable on either flank at any given time.

The biggest warship made indigenously, has an overall length of 263 m and a breadth of 63 m. It is capable of carrying 30 assorted aircraft including combat jets and helicopters. Propelled by four gas turbines, it can attain a top speed of 30 knots (about 55 kmph). The vessel will have a complement of 1,500 personnel.