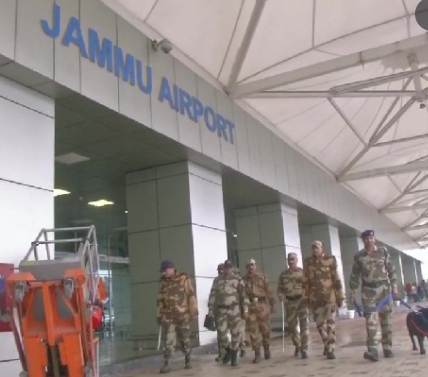 Jammu and Kashmir Director General of Police Dilbag Singh today termed the twin explosions at the high-security Indian Air Force station in the Jammu airport a terror attack. The police, IAF and other agencies were investigating the attack, he said.

Two Indian Air Force (IAF) personnel suffered minor injuries in the explosions that took place a little before 2 AM at the high security airport located around 16 km from the border with Pakistan. Reports say the explosions, the first at 1.37 AM and the second at 1.43 AM, were heard a km away.

Drones with payload were used in both the blasts at Jammu airfield. Another crude bomb was found by the Jammu police. An FIR has been registered under the anti-terror Unlawful Activities (Prevention) Act that allows the arrest of suspects and their detention for up to six months without evidence. The National Investigation Agency has taken over the probe. Teams from the IAF, the National Bomb Data Centre, forensic experts and the Jammu and Kashmir police are also investigating the attack.