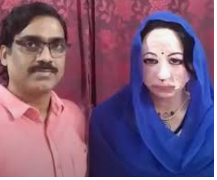 India is a land of innovations and in a recent development, a Computer Science teacher from Kendriya Vidyalaya at the Indian Institute of Technology- Bombay has developed a robot that can speak nine local languages and thirty-eight foreign languages.

Inspired by the Bollywood movie ‘Robot’, Patel developed ‘Shalu’ which is similar to ‘Sophia’, a robot developed by Hanson Robotics of Hong Kong. Shalu can speak regional languages which include Hindi, Marathi, Bhojpuri, Gujarati, Tamil, Telugu, Malayalam. Shalu resembles a woman and can speak like one. She is able to speak thirty-eight foreign languages.

The robot not just resembles a woman, but also speaks like one.She can not only perform many human gestures such as shaking hands, but also smile and display emotions like anger. Patel told IANS, “Shalu has been developed using waste materials like plastic, cardboard, wood, aluminium etc. It took three years to develop it and the expenditure was around Rs 50,000.