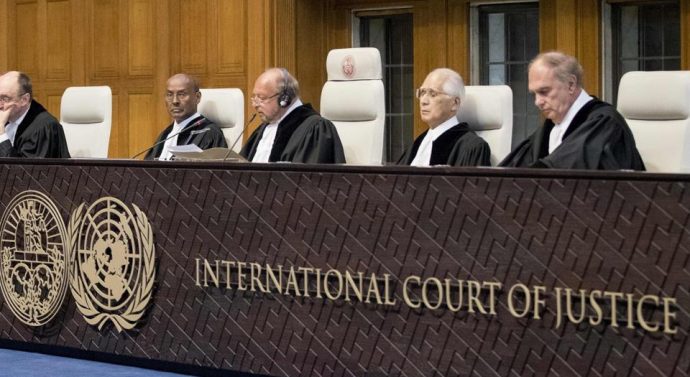 India and Pakistan on Monday clashed at the International Court of Justice  over the fate of alleged spy Kulbushan Jadhav with New Delhi invoking the court’s jurisdiction to see that the death sentence against him was annulled immediately.

Pakistan rejected the plea on the ground that India had no right to invoke the jurisdiction of the UN’s highest court because the Vienna Convention does not provide for matters relating to spies, terrorists and those who indulge in espionage.

However, Islamabad suffered a jolt when it was not allowed by the court to play the video containing a purported confession by Jadhav, a former navy official, who India says was abducted from Iran and taken to Balochistan.

At the end of the day’s proceedings, International Court of Justice  President Ronny Abraham announced that the verdict in the matter would be given as soon as possible and the date delivered in a public sitting.

The Indian case was put up strongly by noted lawyer Harish Salve who demanded that Pakistan should annul Jadhav’s death sentence and see that he was not executed as his trial was held under “farcical” circumstances in violation of the Vienna Convention.

I urge the International Court of Justice  to ensure that Jadhav is not executed, Pakistan reports to this court that the action is taken and that no action is taken that might prejudice the rights of India in the matter of Jadhav, Salve said in his over 90-minute presentation.

The International Court of Justice  had last week stayed the execution on a petition by India, which approached the UN court after 46 years on an issue with Pakistan.

Jadhav was awarded the death sentence by a Pakistani military court last month, a year after he was arrested on espionage charges. India says Jadhav has been kidnapped and framed. Islamabad has rejected 16 Indian requests for consular access to Jadhav, who is held at an unknown prison in Pakistan.

The brunt of Salve’s argument was that the entire matter of arrest, chargesheet and trial of Jadhav were all done in violation of the UN Charter and Vienna Convention in farcical circumstances and on concocted charges as the Indian national was not given legal assistance to defend himself.

Salve said the matter was grave and urgent as Jadhav was kidnapped from Iran on March 16, 2016, brought to Pakistan, presented as an alleged Indian spy and his alleged confession was extracted in custody before a magistrate. He was incommunicado and the trial was also held incommunicado.

The lawyer urged the International Court of Justice  President to take note of the farcical nature of the circumstances of the military court.

Salve said that the provisions of the Vienna Convention recognised that any prisoner has a right to be tried by an independent tribunal as established by law and he should be tried in his presence and defended by legal aid assigned to him. In Jadhav’s case, all the basic provisions of human rights were thrown to the wind, he said.

The facts presented by India establish the violation of all principles of the UN charter and Vienna Convention because of the nature of the trial which destroyed any credibility or sanctity of the army court’s decision sentencing him to death, he said.

Salve cited three past similar cases in which the international court had intervened. These cases include Paraguay versus the US in which the court decided that the American government needed to take steps to give rights of access of a Paraguayan national.

In Germany versus the US, Salve said, the court held that execution of a German national was an irreparable damage to justice. He also referred to a case between the US and Mexico, in which the lives of 54 Mexicans were at stake as they faced execution.

Pakistan mounted a strong defence of its case with Counsel Khawar Qureshi rejecting India’s attempts to invoke International Court of Justices jurisdiction in the case, saying that the provisions of the Vienna Convention did not apply to spies, terrorists and those who indulge in espionage.

Rebutting India’s case, he asserted that this forum is not a criminal court of appeal nor does it exercise criminal jurisdiction.

The lawyer claimed that India had on September 8, 1974, told the International Court of Justice  to exclude itself from its jurisdiction in disputes with Pakistan and from any interpretation and obligation of multi lateral treaties.

He also noted that Pakistan had reservations over the jurisdiction of International Court of Justice  on matters it considered as impinging on its national security.

No evidence was provided by India to back the charge that Jadhav was kidnapped from Iran. We have a long border with India where millions of people reside. If we wanted, one of them could have been picked up. To say that we abducted Jadhav from Iran and brought him to Pakistan seems at best to be far fetched, Qureshi said.

He said that India had at no point made any comment on the Muslim name of Jadhav on the passport seized from him. This requires explanation, he added.

Overall, the relief India is seeking from this court is not available and the provisional measures sought by India cannot be initiated, Qureshi said.

He said that parallels drawn by Salve of the precedents of cases relating to involving the US and other countries, including Mexico and Germany, were not relevant and factually incorrect.

At the outset, Qureshi said that India was invoking the jurisdiction of the court for political theatre and described as bizarre the description of Jadhav’s trial as a kangaroo court.

Dismissing India’s contention that it invoked the jurisdiction of the court because of the imminent possibility of execution of Jadhav, Qureshi said the court was bound to settle disputes between countries peacefully and not waste time on issues sought to be raised for political purpose.

In this regard, he cited the possibility of clemency which was mentioned by Pakistan Foreign Advisor Sartaj Aziz.

Qureshi also said that India did not respond to communication from Pakistan in January this year seeking cooperation in the probe relating to Jadhav.