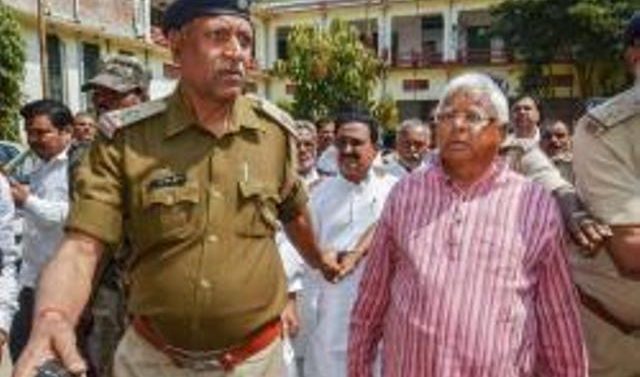 This fodder scam case (RC 38A/96) is related to Dumka treasury (then in undivided Bihar, now in Jharkhand), where the accused have been charged with fraudulent withdrawal of around Rs 3.5 crore in 1995-96.

The quantum of punishment is likely to be pronounced on March 23 after hearing the arguments of some of the new accused on March 21 and 22.

Bihar Chief Secretary Anjani Kumar Singh has also been made one of the new accused in this case as he was the deputy commissioner of Dumka when the fraudulent withdrawal of money took place from the treasury in the 90s.

Lalu, who is already languishing in Birsa Munda jail after being convicted in the Deogarh and Chaibasa treasury case, appeared before CBI judge Shiv Pal Singh for a brief period as he has been hospitalised in Ranchi for the last three days.

On Saturday, he was shifted from Ranchi jail to the Rajendra Institute of Medical Science (RIMS), after he complained of multiple health problems, including rectal piles, low hemoglobin and irregular heartbeat.

The 69-year-old former chief minister had undergone valve replacement in Mumbai a couple of years ago.

A former chief minister is convicted while another ex-chief minister is set free in the same case. Amazing! We are aware of the ‘design’ of Modi and Nitish to finish off Lalu by misusing investigating agencies, said the senior RJD leader.

Lalu now faces two more cases out of the total six fodder scam cases. While the fifth one is related to Doranda (Ranchi), the sixth case is going on in Bihar, which is related to fraudulent withdrawal from Bhagalpur treasury in the mid-90s.