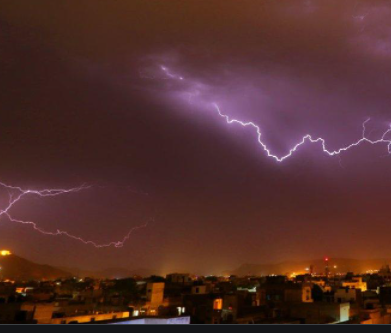 At least 60 people have been killed by lightning in Uttar Pradesh and Rajasthan as parts of these states witnessed scattered rainfall on Sunday. Eleven of them died while taking selfies in front of a 12th century fort in the Rajasthan capital. Forty-one of these deaths were reported in Uttar Pradesh, where Prayagraj alone reported 14 casualties. A majority of deaths were reported in rural areas across the state. Most of them were children and women.

In Rajasthan, a visit to Amer Fort near Jaipur turned fatal for eleven as lightning struck them while taking a selfie on top of a watch tower in front of the 12th century monument. The lightning strike – captured on mobile cameras – was so powerful that dozens of people panicked and jumped off the watch tower. A number of them sustained injuries, according to reports. Twenty-seven people are reported to have been on the watch tower and the fort wall when the incident happened.

At least 23 people died & 25 injured due to lightning strikes in the State till July 11,” Kalpana Aggarwal, Joint Secretary, Rajasthan Disaster Management, told ANI. Prime Minister Narendra Modi’s office said on Twitter that it has released funds from the PM relief fund to the affected families in Uttar Pradesh and Rajasthan.