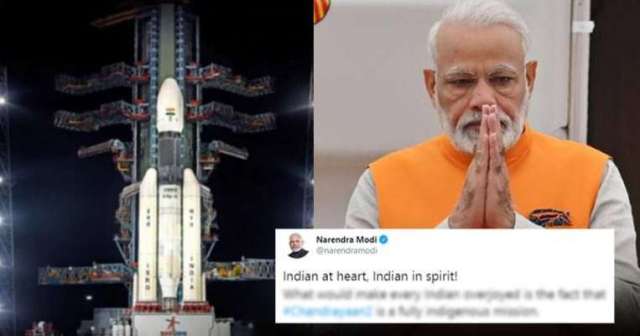 Just before Chandrayaan-2 landed on the moon, contact was lost and scientists got upset. Prime Minister Narendra Modi has encouraged the scientists and he is also addressing the country from the control center of ISRO.

Every difficulty, every struggle, every difficulty, goes by teaching us something new, motivates us for some new inventions, new technologies, and this determines our future success. If the greatest teacher of knowledge is anyone, then it is science. There is no failure in science, only experiments and efforts.

I also salute the family of all space scientists. His silent but very important support was with you. We may fail, but it will not reduce our enthusiasm and energy. We will then move forward with full potential.

PM said that today our willpower to touch the moon has become more determined, determination has become stronger.

PM Modi said that even though some hindrances have come to hand today, this has not weakened our spirits, but has strengthened. Today, even though there has been an obstacle in our path, but we are not deterred from the path of our destination.

In fact, India’s lunar mission suffered a setback early Saturday when ISRO lost contact with the lander Vikram just two kilometers before the lunar surface. Right now ISRO is waiting for the figures. Concerns have emerged on the faces of scientists as Chandrayaan has lost contact just before the moon.

However, the future of Chandrayaan-2 mission costing Rs 978 crore has shrouded in darkness. Indian Space Research Organization (ISRO) President K.K. Sivan announced the breakdown of the contact, saying that the performance of the lander was as per the plan up to 2.1 km before the lunar surface.

He said that he lost contact after that. At around 1.38 am on Saturday, when the 1,471 kg Vikram started moving towards the lunar surface at a speed of 1,680 meters per second from a height of 30 kilometers, everything was fine.

ISRO said in an official statement, “This is the Mission Control Center. Vikram Lander was landing as per plan and his performance was normal till 2.1 km before the destination. After that the contact of the lander was broken from the center on the ground. Analysis of data being done.” On the screens of ISRO’s Telemetry, Tracking and Command Network Center, it was seen that Vikram slightly deviated from his designated path and then lost contact.