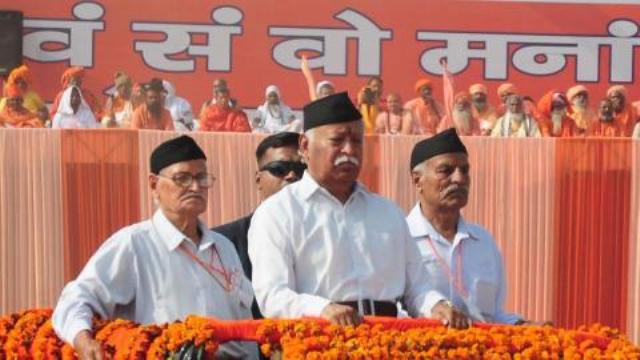 RSS chief Mohan Bhagwat is leading the Sangh’s outreach to cement caste fault lines that it believes divide Hindus and can impact the outcome of the 2019 general election.

The danger that caste fissures pose to a consolidated Hindu vote bank has been a key concern for the Sangh.
In February, Bhagwat spent 10 days travelling to Bihar and spent a week in Uttar Pradesh two populous states where caste fissures run deep and caste arithmetic shapes political outcome to reiterate the need for a monolithic Hindu entity. The RSS chief, who addressed the largest ever congregation of cadre in UP’s Meerut on Sunday has been unequivocal in exhorting Hindus to overcome the differences of caste.Hindus should be united. Divisions in society over caste and violence over the issue are the biggest hurdles in achieving this unity and there are forces that take advantage of it, he said.

social harmony has been the mainstay of Bhagwat’s speeches, but the renewed push for consolidation of Hindus stems from concern over emergence of political entities such as Jignesh Mevani after the attack on a Dalit family in Una and the rise of the Bhim Army, following the clash between Dalits and Rajputs in UP’s Saharanpur. The RSS believes these groups are covertly supported by the ultra Left.

The RSS chief has also reached out to different segments that have felt the heat of the government’s economic policies such as farmers and small and medium enterprise owners in a bid to stem disenchantment with the BJP led NDA. Samajik Samarasta initiatives that include celebrating festivals in Dalit households, appointment of Dalits and OBC priests in temples, and pushing for common temples, crematoriums and wells in villages, have been going on for years. Some headway was achieved, but there is a concerted move by political parties and the ultra Left who followed the policy of appeasement to stoke unrest among communities, a senior Sanghfunctionary in Uttar Pradesh said.

The BJP, which is seeking to repeat its 2014 feat in the Lok Sabha polls and hoping to return to power with a clear mandate, relies heavily on the groundwork of the RSS cadre in mobilising voters.

There is a deep anxiety over the possibility of a Dalit-Muslim combine in Bihar, which can prove to be a formidable alliance. To counter that, there is a concerted effort to woo Hindus with help from the JD(U) to make it a BJP vs RJD contest in 2019, said an academic from Patna University who asked not to be named.

The Sangh’s outreach to the economically backward castes is also seen as a precursor to the BJP building bridges with constituents it did not get support from. The Sangh and the party have been reaching out to communities such as the Koris and the Kurmis, the second-most dominant caste among the OBCs after Yadavs. Caste and religion do not go together on some issues, and there is no 100% caste consolidation anymore. Most parties are trying to give positions to people from castes that were not known to traditionally support them, to appear more secular, said professor Ashish Saxena of the sociology department at the Allahabad University.

Bhagwat’s visits are also expected to give a fillip to the Sangh’s aim to have its presence in all villages. In 2025, the RSS will be 100 years old. It has set a target of strengthening its position in villages and these visits are an effort to increase the Sangh’s presence and attract more people to its fold, said Gyan Prakash Mishra, an academic at the Banaras Hindu University.

Bihar Mohan Bhagwat looks to consolidate Hindu votes in UP