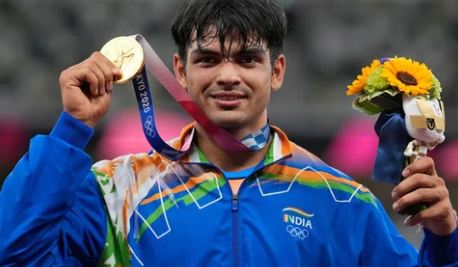 Neeraj Chopra is an Olympic champion! The 23-year-old created history on Saturday as he became the only the second Indian to win an individual Olympic gold by winning the men’s javelin throw final at Tokyo 2020. Out-performing the field by quite a distance to notch up the first track-and-field Games medal for the country.

The 23-year-old farmer’s son from Khandra village near Panipat in Haryana produced the second throw of 87.58m in the finals to stun the athletics world and end India’s 100-year wait for a track and field medal in the Olympics.

The Indian contingent landed in Delhi in the afternoon and will be taken to the Ashoka Hotel now where the athletes and medal winners will be felicitated. Tokyo Olympics gold medal winner Neeraj Chopra was mobbed at the Delhi airport by thousands of fans who waited for hours to meet the javelin star as he returned home with nearly 80 other Indian athletes.