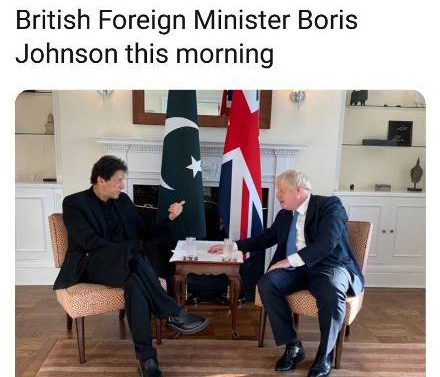 Controversial and ridiculous statements to Pakistani leaders keep on making headlines every day and sometimes even the Pakistani minister does not desist from making inflammatory statements. In this episode, the name of Pakistan’s representative in the United Nations has also been added, who described British Prime Minister Boris Johnson as British Foreign Minister.

Maliha Lodhi tweeted a photo in which Pakistan Prime Minister Imran Khan and British Prime Minister Boris Johnson are meeting. While writing the caption of this photo, Lodhi missed it and she wrote Johnson to Britain’s foreign minister. Shortly afterwards, he realized his mistake and deleted his tweet.

The Pakistan Ambassador retweeted his apology on his old tweet and said that there was a mistake in typing. Prime Minister Imran has met the British PM.

Let us know that Pakistan Prime Minister Imran Khan has gone to America to participate in the 74th session of the United Nations General Assembly. Here Imran Khan met many leaders and talks are on Kashmir. The Prime Minister of Pakistan will meet President Donald Trump on Monday night, where he is again going to plead with Trump to mediate on the Kashmir issue.