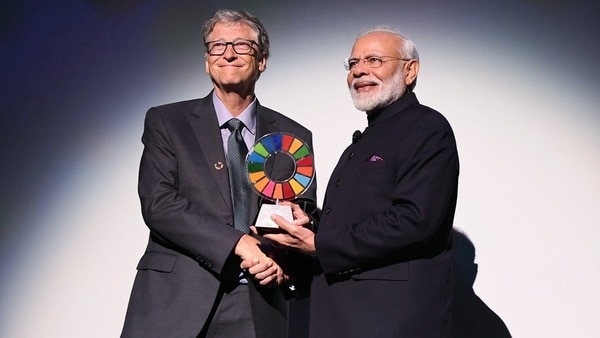 Prime Minister Narendra Modi has been awarded the Global Goalkeeper Award in America. Bill and Melinda Gates Foundation presented this award to PM Modi for the Clean India Campaign in New York. On receiving the award, PM Modi said that this honor is not mine but those crores of Indians who have not only proved the resolve of Swachh Bharat but have also molded it in their everyday life.

PM Modi said that giving me this award on the 150 birth anniversary of Mahatma Gandhi is also very important for me personally. This is a proof that if the manpower of 130 crore people gets involved in fulfilling any one resolution, then any challenge can be won.

The Prime Minister said that when work is done on a goal, on a cause, there is a commitment to its work, then such things do not matter. I dedicate this honor to the Indians who transformed the Swachh Bharat Mission into a mass movement, who started giving cleanliness a top priority in their daily lives.

The Foundation presented the Goalkeeper Global Goals Award to PM Modi for providing sanitation to more than 50 crore people in India. The Global Goalkeeper Award, given by the Bill & Melinda Gates Foundation, is a special honor given to a politician who has shown impressive leadership in the country or globally towards achieving global goals.

PM Modi started the Swachh Bharat Mission in the country on 2 October 2014. So far, 9 crore toilets have been built in the country under this mission. At present, toilet facilities are available in 98% of the villages in the country, whereas 4 years ago the number of such villages was only 38%. According to the data, 27 out of 36 states and union territories have now become open defecation free.