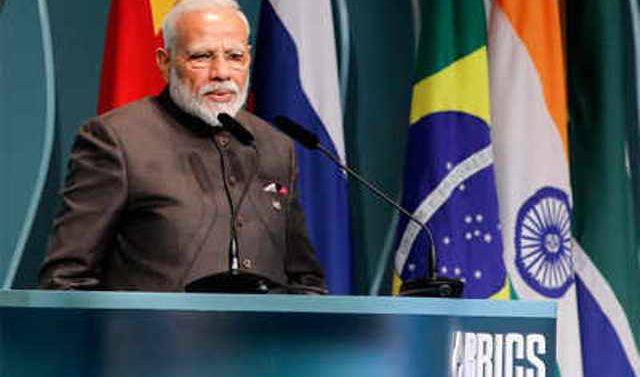 Prime Minister Narendra Modi on Wednesday addressed the BRICS Business Forum held in Brasilia, the capital of Brazil. PM Modi in his address gave a future roadmap for BRICS, while at the same time an invitation to member countries to invest in India. PM Modi thanked the President of Brazil for visa-free entry of Indians and said in his address that India is the world’s most open and business friendly environment due to political ease, predictable policy and business friendly reforms.

He said that by 2024, we want to make India a five trillion dollar economy. The PM said that there are immense possibilities in India. I invite the business of BRICS countries to build and expand their presence in India. He congratulated the organizers and said that BRICS countries have 50 percent share in the world’s economic growth. Despite the global recession, BRICS countries have accelerated economic growth. Brought millions of people out of poverty , achieved new breakthroughs in technology and innovation. PM Modi said that this forum is a good platform for considering our efforts after 10 years of the establishment of BRICS. By making intra-base business easier, mutual trade and investment will increase.

PM Modi said that the tax and custom process among us five countries is getting easier. Our business environment is getting easier. He stressed on making the goal of intra-BRICS trade and investment more ambitious and said that your suggestions will be very useful to further reduce the cost of trading . PM Modi suggested that the priority areas in business should be identified among us for 10 years and based on that, a blueprint of cooperation should be made. He said that our market size and diversity are beneficial for each other.

PM Modi suggested identifying five areas for joint ventures till the next BRICS Summit. He said that BRICS countries are famous for the talent and creativity of their people. Attached to private sector efforts focused on human resources. PM Modi said that we five countries should also consider the Social Security Agreement.