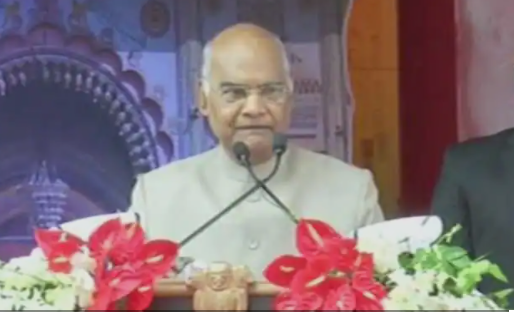 President Ram Nath Kovind on Sunday (August 29, 2021) inaugurated the ‘JanaJana Ke Ram’ Ramayana Conclave organized by the Department of Tourism and Culture in Uttar pradesh’s Ramkatha Park. The President is currently on a four-day visit to Uttar Pradesh.

A spokesperson of Uttar Pradesh government said, “Starting from August 29, the Ramayana Conclave will be organised till November 1. The Ramayana Conclave will be held on different dates in different phases at different places in Uttar Pradesh. These include Ayodhya, Gorakhpur, Ballia, Varanasi, Vindhyachal, Chitrakoot, Lalitpur, Shringverpur, Bithoor, Bijnor, Bareilly, Ghaziabad, Mathura, Garhmukteshwar, Saharanpur and Lucknow.

President Kovind will leave for Ayodhya on Sunday morning from Charbagh railway station in Lucknow by a presidential train and will reach the city by 11:30 am. The train will cover the distance of 135 kms from Lucknow to Ayodhya in 2:20 hours. Along with a visit to Ram temple, the President will also be involved in several inauguration and foundation stone laying programs. He will leave for Lucknow at 3:50 pm via presidential train and reach Lucknow at 6:20 pm.