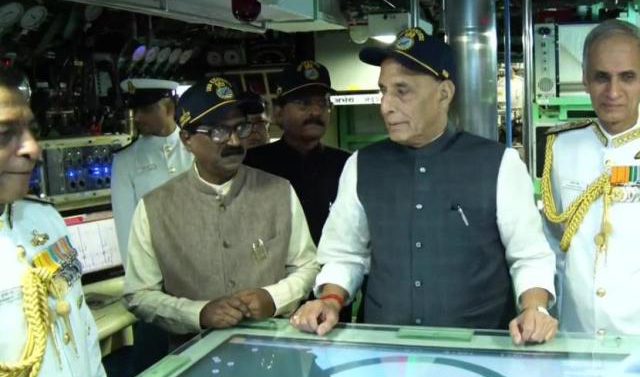 Union Defense Minister Rajnath Singh did yoga with security personnel at INS Vikramaditya in Goa on Sunday. During this, Rajnath Singh said that India can never forget the 26/11 attack. He said that earlier mistakes we have made, we will not repeat them now. Defense Minister Rajnath Singh has said that the threat of terrorist attack on the country’s maritime borders remains intact even today. Without naming Pakistan, he said that behind this conspiracy there is a conspiracy of a neighboring country and he wants to destabilize India, but his plan will not be allowed to succeed.

After doing yoga on INS Vikramaditya, the Defense Minister told journalists that India cannot forget the 26/11 terror attack. He warned Pakistan that we could not repeat the mistake we made during the Mumbai attack. So the Indian Navy and the Coast Guard are always alert and alert. Please tell that the warship INS Vikramaditya is patrolling towards the western water border of the country at this time.

When reporters asked Rajnath Singh about the danger on the country’s maritime border , he said, “Every country in the world has to maintain adequate security, we cannot rule out any possibility.” He further said, “When it comes to the question of our neighbor, you are well aware that he continues to do evil acts to destabilize India.”

Rajnath Singh lived on INS Vikramaditya on Saturday night and tried to understand the working of submarine, frigate and aircraft careers. Regarding the terrorist threat in Jammu and Kashmir, he said that there is no need to tell anyone what the consequences will be if the terrorists come here.