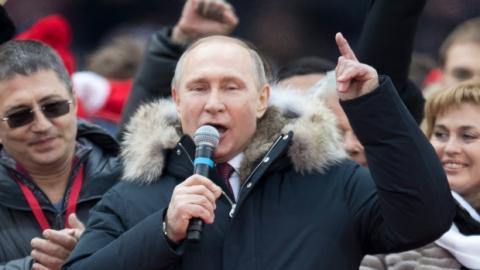 Russians headed to the polls today in elections set to hand President Vladimir Putin a historic fourth Kremlin term, as the country faces increasing isolation over a spy poisoning in Britain and a fresh round of US sanctions.

With the vast country stretching across 11 time zones, polls opened in the Russian far east at 2000 GMT on Saturday and will close in Kaliningrad, the country’s exclave in Europe, at 1800 GMT on Sunday.

With Putin not facing any serious challenge to his rule, the Kremlin is seeking high participation to give legitimacy to his inevitable fourth term.

Since taking power 18 years ago, Putin has stamped his total authority on the country, silencing opposition and reasserting Moscow’s lost might abroad.

Polling at around 70 per cent, the macho leader is sure to extend his term to 2024 despite a lacklustre campaign and his refusal to participate in televised debates.

Putin has sought to use the election run-up to emphasise Russia’s role as a major world power, recently boasting of its “invincible” new weapons and continuing Moscow’s support for the Syrian regime in a bloody civil war.

Russia goes to polls to give historic win for Putin