Home / News / World / Sikh scholar from Lahore said, Sikhs in Pakistan on the verge of extinction 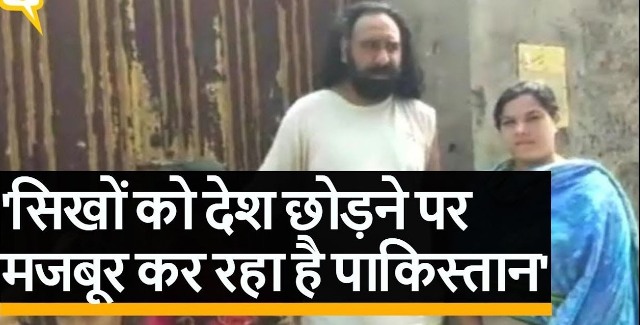 A group of Sikhs are sitting on the floor of Nankana Sahib (now in Pakistan), the birthplace of Guru Nanak Dev. These include the young and the elderly. There is a silent silence on everyone’s face.

These Sikhs are wearing traditional salwar-kameez. They have not gathered for any religious event in this historic gurdwara. Rather, they are working to express their concern over the alleged kidnapping of a 19-year-old girl from their community and then the incident of forced marriage and conversion.

The girl is the daughter of Granthi of a local gurdwara located in the same neighborhood of Nankana Sahib. In one video, the girl’s family alleged that she was forcibly picked up and converted to Islam. In another video, the girl appears to deny the force.

The way the girl says about her consent, the small population of Sikhs in Pakistan cannot believe it.

More than the recorded message, the face of the girl is telling the whole story for them. The Sikhs were kept out of the latest population in 2017 by Pakistani authorities. Therefore, their population is not well known in Pakistan.

After 19 years in Pakistan, the total population was counted in 2017. However, according to scholars associated with Sikhs, the number of Sikhs in Pakistan has fallen sharply in the last two decades. In 2002, the population of Sikhs was 40 thousand, now it has reduced to just eight thousand.

Professor Kalyan Singh, Professor and Minority Rights Activist at GC College University, Lahore, says that one of the reasons for declining Sikh population is definitely forced conversion. Professor Singh also blames the neglect of the condition of the Sikhs of Pakistan on behalf of the world’s rich Sikh community.

Professor Singh said that similar situation of Sikhs is also in Afghanistan and Iran. Professor Singh also believes that there is no strong law like family law for Sikhs or minorities in Pakistan.

He says that there is no special legal protection to prevent the forced conversion of religious minorities in Pakistan.

Professor Singh says that from the investigator to the lawyer and judge, most are from the majority community. Therefore, there is no legal solution to the issue legally. He says that education, poverty and discrimination are important issues for the eight thousand Sikhs left in Pakistan.

Sikhs have a historical association with Pakistan. After the partition in 1947, most of the Sikhs came to India and left behind their property, business as well as the religious heritage of historical gurdwaras. 25 years later, the Simla Agreement paved the way for travel and religious visits across the border.

This project is very important because it is related to the faith of Sikhs. But the way in which reports of dwindling Sikh population in Pakistan and forced conversions are coming, it has worried the Sikh community inside and outside Pakistan.

The Delhi Sikh Gurdwara Parbandhak Committee, controlled by Akali Dal Badal, has targeted Pakistan Prime Minister Imran. Senior executive member of the committee Harinder Pal Singh said that there is no concept of conversion to Sikhism. This has revealed the dual character of Imran Khan.

He said that on the one hand he makes tall claims for initiatives related to Sikhs and on the other hand, Sikh women are being treated in this way in their country. Singh said that all the claims of Imran Khan are now under doubt.