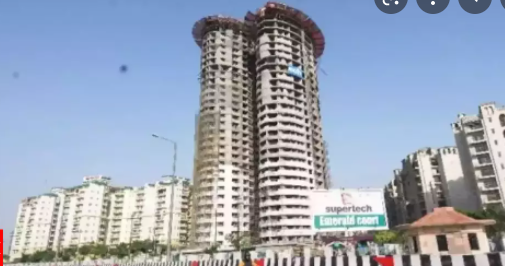 Twin 40-floor residential towers in Uttar Pradesh’s Noida – which house over 900 flats and were built by real estate firm Supertech – will be demolished over the violation of construction by-laws, the Supreme Court said Tuesday, as it upheld an April 2014 decision by the Allahabad High Court.

The company has said it will file a review petition against the judgement. A two-member bench of Justices DY Chandrachud and MR Shah slammed the towers’ illegal construction, which they ruled was achieved by collusion and an “unholy nexus” between Noida (New Okhla Industrial Development Area) authorities and the builders.

The court also slammed a “rampant increase in unauthorised construction” and stressed that protection of the environment and safety of residents had to be considered at all times.Supertech had defended its construction by insisting there was nothing illegal. Among other arguments made by Vikas Singh, the lawyer representing the company, was that the residents welfare association that filed the case did not exist when construction started.