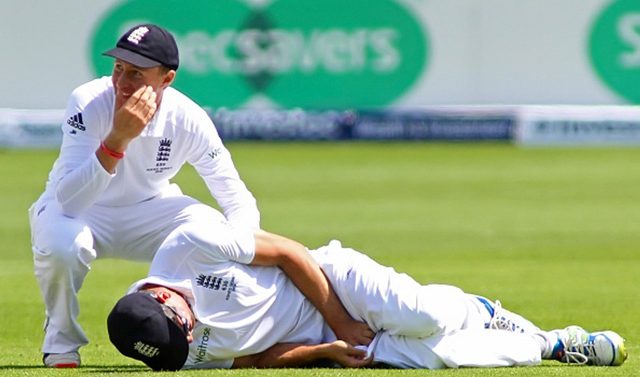 On the third day of the fourth Ashes Test being played in Manchester between Australia and England, a major accident was averted on the field. In fact, in this match, a ball from Australian fast bowler Mitchell Starc went to England captain Joe Root.

A ball with a speed of 140 kmph was hit by Mitchell Starc on the private part of the route. After which Root’s worn L guard also broke. Mitchell Starc’s ball was so fast that Root’s L guard broke in two.

If England captain Joe Root had not worn the L guard, he could have suffered serious injuries. Despite wearing an L guard, Root remained on his knees long after the ball was hit. Later he woke up when the pain subsided and he continued to bat.

The incident with Root took place in the 39th over of England’s innings. The fourth ball of this over started going to the private part, beating the bat of the root. Root bounced as soon as the ball hit and sat down on his knees due to pain.

Physicians from England team came to help Root. After this, Root drank water and took a little walk. Then he changed his L guard. Seeing the broken L guard of Joe Root, it can be estimated how fast the ball was. Usually such incidents are seen on the cricket field.

Let us tell you that Australia brought England under pressure on the third day of the fourth Ashes Test being played at Old Trafford ground in Manchester. By the end of the day’s play, England somehow scored 200 runs at the loss of five wickets. The hosts are still 297 runs behind Australia. Australia declared their first innings for 497 runs after losing eight wickets.

On day three, Rory Burns and captain Joe Root took over the hosts for the second season. In the third season, Root also completed his fifty runs. They shared a 141-run partnership for the third wicket.

Hazlewood broke the partnership by dismissing Burns for a total score of 166. Burns scored 81 runs in 185 balls with the help of nine fours. Captain Root also became a victim of Hazelwood. Root had to return to the pavilion on a personal score of 71. The captain faced 168 balls and hit 10 fours.