Home / World / The impact of the smoke of fire in the forests of Indonesia has reached Singapore, 1150 kilometers away. At the same time, the Malaysian government, 1440 km away, has distributed 50 lakh masks to protect its people from the smog caused by this smoke. 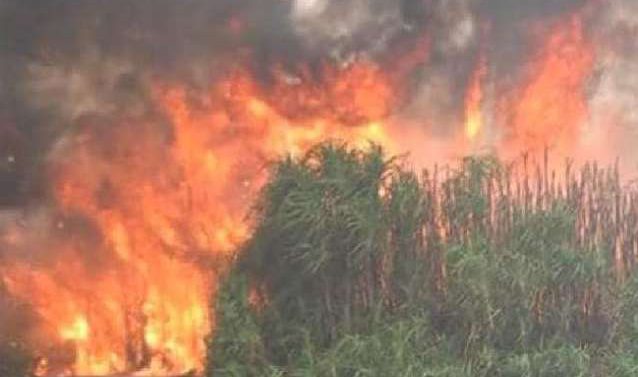 There is a terrible fire in the forests of Indonesia. This fire has spread so much that the effect of its smoke has reached 1150 kilometers away to Singapore. At the same time, the Malaysian government, 1440 km away, has distributed 50 lakh masks to protect its people from the smog caused by this smoke. In the last few weeks, the forests of Sumatra and Kalimantan in Indonesia have caught fire. Due to this, 9.30 lakh hectares of wooded area has been burnt. Thousands of locals have been evacuated to safer places. At the same time, to extinguish and control the fire, about 10,000 fire personnel and personnel have been deployed.

Last week, there was a deep smog in the sky of neighboring countries Singapore and Malaysia. Due to this, the air quality there has deteriorated. This fire was caused by farmers who burn weeds from their fields. However, it caused a fire in the forests adjacent to the fields. Farmers and tribals living in the Amazon jungles of Brazil also do similar work.

On Tuesday, the Malaysian government distributed 5 million face masks in the state of Sarawak. Because the air pollution has reached the highest level due to the smoke spread from the forest fire. 409 schools have been closed in this state. The level of air pollution in the air, ie the Air Pollution Index (API), is measured by particulate matter PM-2.5 per cubic meter. However, in the last 24 hours, 11 of the 16 states in Malaysia had APIs in the range of 101–200. That means very dangerous air. API was the highest in Pahang district of Rompin State at 232. At the same time, there was API 151 in Singapore.

ccording to the Asian Specialized Metrological Center, air pollution levels in the surrounding countries Malaysia, Singapore and Brunei are increasing rapidly due to the fire in the forests of Sumatra and Kalimantan, Indonesia. The center said that 1286 places have been set on fire in the jungles of Sumatra and Kalimantan. In view of the increasing pollution in our country, Malaysia has asked the Indonesian government to make rapid efforts to extinguish the fire. So that the fire does not spread anymore.

Currently in Indonesia, the API has crossed the 1000 range. There, visibility decreased to 100 meters. The Indonesian government has said that whoever is responsible for this fire will have to pay a fine of 10 billion Indonesian rupees, or 4.99 crore Indian rupees. With this, he will have to remain in jail for 10 years. Only last week, the President of Indonesia, Joko Widodo, said that he was feeling very embarrassed because of this fire.