Home / News / Traffic rules will have to be broken more heavily from today, only the salary will end in paying fines 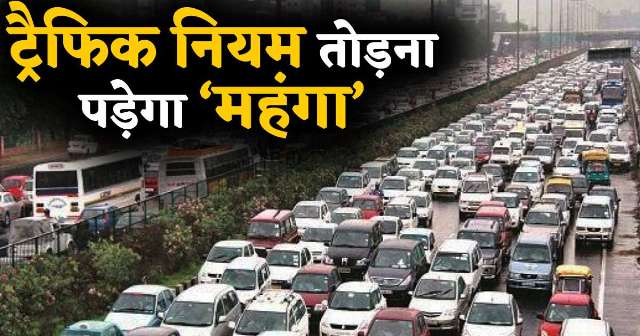 The new motor vehicle law has come into force from midnight on Sunday.After the amendment in the Motor Vehicle Act, now for violating traffic rules, fines up to 10 times more will have to be paid. This rule has come into force from 12 midnight on 1 September. The Delhi Traffic Police carried out intensive checking operations in many areas of Delhi at midnight. Many people were seen breaking traffic rules, on which the police imposed a fine.

Now, for violating the rules of driving without license, driving drunk, overspeed etc., more penalty will have to be paid. Under the new rule, there is a provision of 6 months in jail and a fine of up to Rs 10,000 for the first offense on driving a drunk. While the second time they commit a mistake, they will face jail for 2 years and a fine of up to Rs 15,000. Apart from this, instead of Rs 500, a fine of Rs 5,000 will have to be paid for driving without a license. On the other hand, if a minor drives a vehicle, he will have to pay a fine of Rs 10,000, which was earlier 500 rupees.

Similarly, there was no penalty so far for not giving way to the emergency vehicle, but for not giving way to such a vehicle, a fine of Rs 10,000 will have to be paid. A fine of Rs 1000 will be charged instead of Rs 500 for driving without a helmet. Also, the driving license can be suspended for 3 months. Due to lack of high fines, people are reluctant to follow the traffic rules, but now the fine increases will make people afraid before breaking the traffic rules. Many provisions have been made in the amendment, such as the fine has been increased from Rs 1000 to Rs 5000 for talking on mobile while driving.