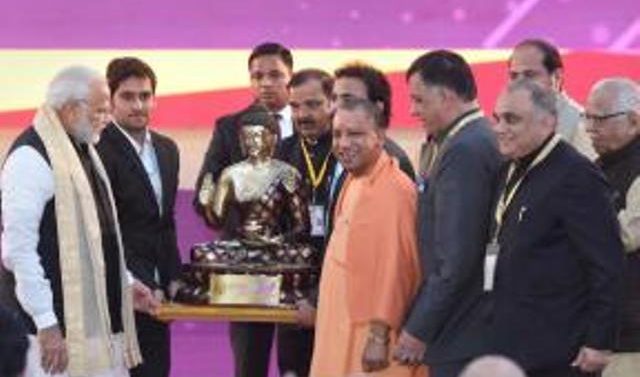 On the inaugural day of the UP Investors’ Summit, the state signed 1,045 Memorandums of Understanding  worth Rs 4.28 lakh crores.

Addressing the gathering, Chief Minister Yogi Adityanath said, It is a matter of pride for the state that fortune-500 companies are participating in the summit. I want to tell you all that till now, we have signed 1,045 MoUs worth Rs 4.28 lakh crore I have recently presented budget of Rs 4.28 lakh crore and the figure of MOUs signed is the same… We are heading towards a new Uttar Pradesh.

Yogi added, “Uttar Pradesh is heading towards development and shedding its ‘bimaru’ tag. We are trying to become developed.”

Earlier on Wednesday, while inaugurating the summit in Lucknow, PM Narendra Modi said that Uttar Pradesh can become the growth engine of the country and the Yogi government is building a new UP.

Uttar Pradesh is blessed with all the riches, it can become the growth engine of the country, PM Modi said, inaugurating the two-day ‘UP Investors Summit’, which is being attended by around 5,000 people, including industry leaders from India and abroad, chief ministers, Union ministers, policy makers and academics.

The summit is an attempt to establish UP among the developed states and its focus areas include food processing, dairy, handloom and textile, MSME, IT, start-ups, electronic manufacturing, films, tourism and civil aviation, the chief minister added.