Home / Sports / Want to malign me burning me: Paes 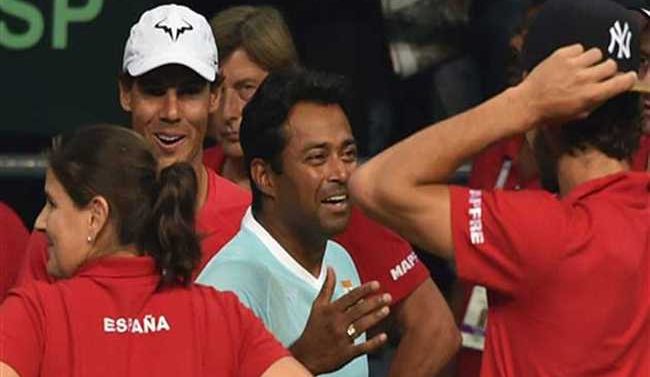 Despite great achievements internationally dispute Leander Paes are part of life. Indian tennis ‘Marathon Man’, said it fired him nothing but the false propaganda of some rivals. Olympics, the Asian Games or the Davis Cup, the pace when the team play on the big stage find themselves surrounded by controversy.

Paes said he does not matter what people think or say about them, because he is writing his name on the pages of history, no one can change that. Davis Cup tie against Spain during the interview, Pace said, “most of my career in this part are very envious of me opponent. They may not understand that winning 18 majors and seven have to do to play the Olympics. Some competitors even if you give birth so he will not be able ten. He would drop me to work hard place. By working behind the scenes in the wrong to harm my reputation so that people’s perception of the Leander became bad person. Reputation goes your whole life to get over it just takes a second.
”
Without naming anyone possibly Paes Sania Mirza was responding to a tweet in which the Hyderabadi girl took it out against him. She had tweeted: “The only way to win a toxic person, not just sports.” Then there was consternation over the fact that in the world of tennis after Sania said the person who poisoned. Paes, Sania tweeted, according to experts, it was about. Leander’s Davis Cup World Group playoff tie against Spain on Saturday doubles match after disputed the statement that India had a chance to win a medal in mixed doubles at the Olympics in Rio, but the wrong selection, India lost the chance. Pace’s statement was a direct attack on Sania, Sania, Paes since teamed with Rohan Bopanna instead wanted to play in Rio.

Paes said, “do not worry about those who hate. You play your game, run in your lane, do not go into the other lane. I wrote your name in history. It is the fruit of your hard work. In modern times all want to live in the spotlight, to be the hero. Bunkenge people, let them barking, they will only worsen. I will run my race. Junior does not say that until I am always beat you when and I will win a Grand Slam. I will play. I had to earn it and the other will do the same.
”
Paes suffered problems in his personal life. He recently caught in litigation over custody of their daughter and their relationship breakdown cases made media headlines.

Want to malign me burning me Paes