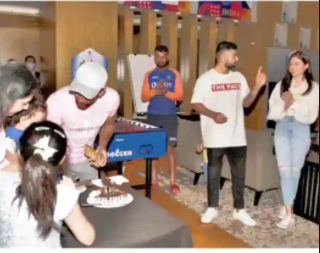 Wriddhiman Saha celebrated his son’s birthday with the rest of the Indian team in Ahmedabad. Indian cricketer Wriddhiman Saha’s son Anvay Saha celebrated his birthday on March 6 and turned one this year. The Wriddhiman cricketer hosted a bash in Ahmedabad where India won the test match against England. The party was attended by the Indian Cricket squad including skipper Virat Kohli. The captain was joined by his wife and actor Anushka Sharma at the party.

In the photo, Virat is seen sporting a handsome look wearing a white T-Shirt and black jeans with white sneakers. While Anushka looked pretty and fit as a fiddle in a white shirt with balloon sleeves and blue ripped jeans. Kohli was seen standing with Anushka in one of the photographs while the cake was being cut.The birthday party took place in the Indian cricket team’s bio-secure bubble in the city. A candid picture of Virat Kohli and Anushka Sharma celebrating the first birthday of Wriddhiman Saha’s son Anvay in Ahmedabad was shared online.

The wicket-keeper’s child, Anvay, turned one on Saturday (March 6), and several Indian players celebrated the occasion. Saha was part of the Indian team, which defeated England 3-1 in the recently-concluded Test series. Saha did not get to play in the four-match rubber against England at home as Rishabh Pant continued his stellar run with the bat and behind the wickets. They are currently in Ahmedabad, where the Indian cricket team has just triumphed over England 3-1 in the Test series.